My name first became known in British nursing circles through a controversial column I wrote as a nursing student in Nursing Mirror in the 1970s. I then entered nursing journalism full time because I believed the media were a key means of promoting change in health care and nursing. I held various positions on Nursing Mirror, Nursing Standard and Nursing Times, and relaunched as editor a magazine for nurses in leadership positions, entitled Senior Nurse. Later I returned to Nursing Times as its editor, then editor-in-chief, where I won several awards. In 2011-2012 I launched and edited NMC Review for the Nursing and Midwifery Council, UK.

Journalism has always given me a great overview and networks, with assignments ranging from interviews with health care leaders and politicians to investigations of poor care in mental hospitals. It also taught me writing, editing, communication and public relations, and introduced me to the worlds of publishing and marketing - invaluable expertise in all my subsequent roles, especially in proactive handling of the professional and general media.

My words are widely read and I have written many books, reports and articles. I am currently writing on the nursing contribution to improving global health, strengthening gender equality and supporting local economies. I'm also slowly working up a book on the portrayal of midwives in Christian nativity art.

My best-known publication is The Politics of Nursing, Heinemann, London, 1985. A nursing best-seller, it is now a standard text in colleges of nursing in the UK. A recent unsolicited reader review on the Amazon website said:

'The Politics of Nursing is a unique, interesting and totally gripping book that all nurses who care should read. This small but punchy and beautifully crafted book says all and more about British nursing… the truths of what nursing really is, has to offer and needs for its success and transformation for the future. It is well researched, totally original, politically and practically educational with many critical viewpoints. Everything covered in this book is beneficial to all nurses who identify with the true meaning of care. I found The Politics of Nursing truly inspirational and captivating. I thank Jane Salvage for bringing her words of wisdom into my life.' 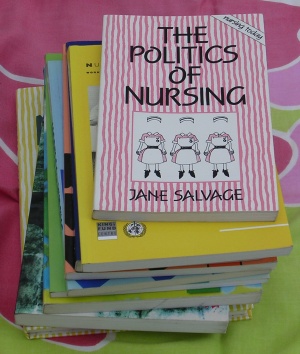 The Politics of Nursing

Models for Nursing (also in Spanish)

Nurses at Risk : A Guide to Health and Safety at Work

Nursing in Action : Strengthening Nursing and Midwifery to Support Health for All

Nursing in Europe : A Resource for Better Health (in many languages)